The lush Teifi Valley, in the foothills of the Cambrian Mountains, is a truly remote and unspoiled area of mid-Wales. These mountains are the source of many of Wales’s biggest rivers. This walk explores the valley carved out by the River Teifi and uncovers some strange reminders of the area’s past.

Beginning near at the churchyard, where among other macabre finds is a stone marking the grave of an amputated leg (its owner emigrated to America), the route follows the river to a ruined 12th-century abbey: Strata Florida (which means Vale of Flowers). On the skyline just above the abbey, walkers might spot a tall figure holding a staff and trudging head down against the wind. Built from railway sleepers, this outdoor sculpture, named “Pilgrim”, is one of several commissioned to celebrate the Teifi Valley’s archaeological heritage.

After skirting the woodland and taking in stunning views of the abbey ruins in the valley, the route continues alongside the river. After the impressive abbey, a jumble of stones in an open field may not seem worth closer inspection, but these are the remains of a ty unnos (one-night house). They began life as hovels – hastily thrown together stone buildings put up (illegally) on common land between the 17th and 19th centuries.

According to custom, if you could build one overnight so that smoke was visible from the chimney by morning, you could legally live in it. The amount of land claimed around the house depended on how far the builder could throw his axe! 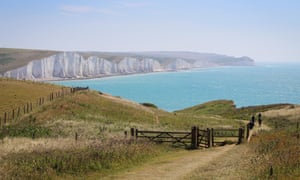 The Cuckmere Valley is probably one of the most popular beauty spots in southern England. Sandwiched between the holiday towns of Eastbourne and Seaford, and downriver from the charming South Downs village of Alfriston (beloved of the bohemian Bloomsburys and 20th-century Eastbourne artist Eric Ravilious), it is a mecca for walkers hungry for a quintessential English landscape.

In the distance, the bold white cliffs of the Seven Sisters dip and rise like a fairground ride, standing as a symbol of British fortitude. But beyond its obvious scenic appeal, this landscape hides stories of conflict, sacrifice and forgotten heroism that just might change our view of it.

Our walk begins just outside Seaford at South Hill, an isolated wooden barn and large car park from which a series of footpaths lead towards Seaford Head and Birling Gap in the other. It’s the starting point for many a ramble along the South Downs Way. 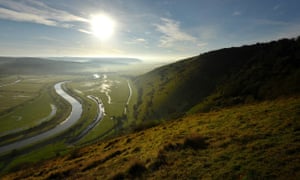 But this beauty spot was once part of a sprawling military camp where men lived and were trained before being sent to the Western Front in 1914. North Camp is now buried beneath the streets of the modern town centre, but for the eagle-eyed, the remains of South Camp are still faintly visible. Though ploughing has destroyed much of the camp’s physical evidence, irregular humps and bumps can be made out, including the remains of long pits dug to prepare the men for the real trenches. Aerial surveys carried out by Historic England reveal the camp clearly.

Many of those who trained at Seaford had come from across the world to fight for the “mother country”, including African, Caribbean and Asian soldiers ill-prepared for harsh British winters. Despite their sacrifice, these soldiers were often assigned dirty and dangerous jobs such as loading ammunition, laying telephone wires and digging trenches. 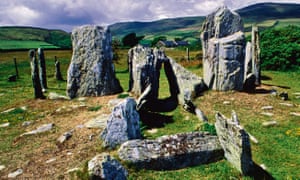 With more than 40% of its land unpopulated, the Isle of Man still offers a degree of wilderness for those prepared to go off the beaten track. This gentle walk from the wooded Ballaglass Glen down to a secret cove offers a chance to slow down, tread softly and enjoy one of the least-explored places in the British Isles.

Following the Cornaa River on its serpentine path through the glen, we’re walking in the footsteps of a huge sheet of ice, a glacier that spread down from Scotland during the ice ages of the last 2.5 million years. Keep an eye out for large solitary rocks, known as “erratics” (because they don’t fit in here), which were carried in sheets of ice. When the ice melted, they were left behind, leaving a little piece of Scotland on Manx soil.

A short diversion leads to the standing stones of Cashtal yn Ard (the name means Castle of the Heights). It’s a large Neolithic burial site on high land with stunning views. Though its origins have never been fully explained, its size and location probably mean it was built as a communal grave for local chieftains and their families.

From burial underground to renewal above, refresh yourself with a drink or even a dip in the mini plunge pools created by the deeply cut river before you stroll back through the glen back to the start. 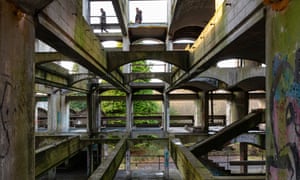 A 40-minute train ride from Glasgow, on the banks of the Clyde, is the village of Cardross. And a short walk from the station are the woods of Kilmahew Glen, a place that has lived many lives and left much for us to discover, from the medieval to the modernist. Its name comes from the Gaelic cille, referring to a settlement of monks.

Nearby are the remains of an early chapel, thought to have been built on the site of a pagan sanctuary. Among the woods and rhododendrons there are tantalising glimpses of what was once a grand country estate: a ruined gatehouse, overgrown lakes with manmade islands, and giant redwoods standing sentinel either side of the path. Today, its only occupants are the barn owls that roost among the ivy. Keep going and you’ll be rewarded with waterfalls and panoramic views of the Clyde estuary.

The return route offers perhaps the greatest surprise. In the 1950s, the site was chosen for the new St Peter’s seminary for training Catholic priests. But instead of tearing down the old mansion, the architects designed a new, daring, modernist structure of concrete and glass around the existing mansion, described has been described as a “modern building of world significance”.

Barely half a century old, it has been abandoned since the 1980 and is now a tantalising ruin, adding another layer of history to this ancient place. 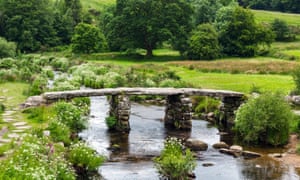 When the sun shines on Dartmoor it glows on the rocky hills called tors. When the clouds descend and the rain is nearly horizontal, it can be one of the bleakest places imaginable.

Granite underpins this walk: first, we cross a traditional Devon clapper bridge – a large granite slab over the river – to reach the evocatively named Grimspound. Now under English Heritage, it’s one of our best-preserved prehistoric settlements. A low wall surrounds the remains of 24 roundhouses – built by our bronze age ancestors in about 1450-700BC. Today, it’s hard to imagine these piles of rocks as people’s homes, but discoveries of paved floors, stone benches, hearths and cooking holes start to build a picture of domestic life perhaps not so unlike our own.

Further on is the abandoned village of Challacombe and the ruins of several longhouses. These homes were essentially one big room, with an internal wall to divide people from their animals. During long winters out on the moor, the animals’ warmth must have more than made up for their odours. Refresh yourself at the historic Warren House Inn, built to serve tin miners. According to folklore, the fire in the original pub was “always in”, and when the new inn was built, the landlord transferred some smouldering peat from the original building to the new hearth. So the pub fire is said to have never gone out!

Caroline Millar is project manager of Discovering Britain, run by the Royal Geographical Society (with IBG). More routes at discoveringbritain.org

Flights: Cabin crew reveal why you should wear shoes onboard an aircraft

Why Tasmania’s Bay of Fires is the best camping spot in Australia
We and our partners use cookies on this site to improve our service, perform analytics, personalize advertising, measure advertising performance, and remember website preferences.Ok