We have arrived in a broad grassy hollow within the dunes of Kenfig nature reserve and ranger David Carrington has set me a task. “There’s an orchid within six feet of me. Can you find it?”

It’s not an easy task. There are dozens of prominent colourful flowers within arm’s reach of David. These dunes, on close inspection, are an eye-popping floral cornucopia. But at last I spot it: three gorgeous pink petals arranged around a central lobe of deep claret and yellow. It looks a lot like a spectacular insect. 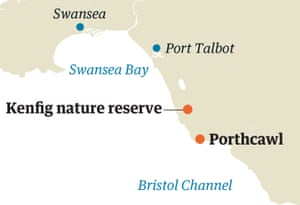 “Bee orchid,” says David. “Actually, there are two other species of orchid to your right.”

One of them is easy: a fiery pyramid of scarlet florets named, prosaically, pyramidal orchid. The other takes a little longer as the flower is green. David eventually takes pity and points it out: a twayblade orchid, a tall spike of inconspicuous green flowers. Not all are so unobtrusive: August will bring the autumn lady’s tresses orchid, for example, with spirals of white flowers on stems up to a foot long. “We’ve got orchids here from April to September,” David tells me, “Fourteen or 15 species.”

We walk up a grassy dune and there, in the distance, is the Port Talbot steel works. I can read the giant Tata logo on the building. It might seem surprising that the 1,300-acre Kenfig national nature reserve, one of our most valuable patches of conservation land, is so near the industrial heart of south Wales. A bit like the British steel industry, however, this fragile wilderness is also threatened. David is himself an endangered species: there used to be five wildlife wardens here, giving guided walks, manning a handsome visitor centre, pointing out the orchids to less observant visitors like myself. Now only David and a small band of enthusiastic volunteers remain. 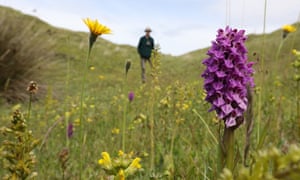 We stroll along a long, low damp area, known as a slack, and find a huge orchid nestled in a bank: the flower stalk must be 18 inches tall and on top, not yet emerged, a juicy stack of imminent flowers. “Orchids hybridise like crazy,” David explains. “This one has got elements of a spotted orchid and also a pyramidal. That’s the problem. Some experts will split a species in two, others will lump them together.” He laughs. “So we have 14 or 15.” 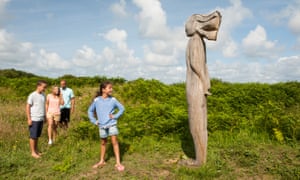 Something flies past, buzzing, and David is off up the path. “Get your camera! Quick!” We rush off to a flower-fringed area and stop. David points out a large pale bumblebee. “That’s a shrill carder bee – I haven’t seen one in years.”

It is, in fact, Britain’s rarest bee, a creature known only from a few coastal sites in Wales and southern England. We linger a while, spotting two lizards basking on a wooden post and a pair of cuckoos who zoom briskly away. Then David decides to show me the reserve’s true rarity.

Leave the car at home: see the UK coast without driving

We head back to the slack and, next to a cane jammed in the ground, there is a small inconspicuous orchid, beautiful on close inspection. “That is a fen orchid and it is only found here.”

The story of this flower is remarkable. Back in the 1990s, when David first arrived at Kenfig, there were thousands, but year by year they declined. “I got quite paranoid,” he says. “It seemed like I only had to look at one and it would disappear.” 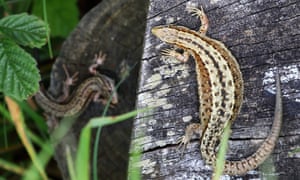 By 2015 there were, he estimated, around 200 remaining – the entire British population. Then a new strategy of cutting the grass and even scraping the surface of the dune slack was begun. “The flower actually survives on shifting dune systems. It needed the disturbance.” Now numbers are back to over 1,000 and Kenfig attracts botanists from all over the world, the best time to see them being in June.

I leave the place in awe of its delicate beauty. I’ve seen two species that are each rarer than the tiger or rhino and I’m a mile from the M4. I want to know what other unexpected gems this area harbours.

At the nearby seaside town of Porthcawl I rent a fat bike (£10 per hour) and take a long, lazy ride along the sands – there are miles of them – stopping when the River Ogmore blocks my progress. Then I walk into the Merthyr Mawr dune system, neighbour to Kenfig. Almost immediately I’m spotting pyramidal orchids and lots of bees. A rabbit watches me from behind the blue spikes of viper’s-bugloss flowers and red-caped cinnabar moths flit ahead. 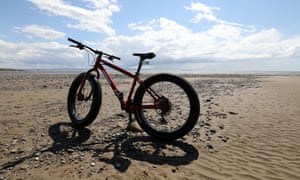 By the time I get back, I’m itching to get into the sea, so I head down to Porthcawl Surf school (beginner’s lesson from £30) and grab a lesson as the tide goes out. Hugh Murray started the business after the 2008 financial crash left him jobless. It proved a shrewd decision as the beach is only three-and-a-half hours from London. “You can do it in a day,” he points out.

With the sun bursting out, we head to the breakers. Hugh turns out to be a fine tutor. Within an hour I stand up on a moving surf board and ride a wave. Sadly Hugh, camera in hand, is momentarily distracted and misses the triumph, one rarer than any living creature in UK and unlikely to be seen again. Let’s hope the fen orchid and shrill carder bee fare better.
• The trip was provided by Bridgend Tourism. Coed-y-Mwstwr hotel, close to Kenfig and the beaches at Porthcawl, has doubles from £100 B&B