On the second morning of our trek up Poon Hill, in a clearing in a rhododendron forest, my friend Ali and I stopped for a breather. Rarely has the word been more apt. I had to speak through my panting breaths. I thought of those messenger boys sent to deliver news of ancient battles. Cannae, perhaps, as in “Cannae go on.”

Our guide, Arjun, rested against a rock. I thought I saw him roll his eyes. Above us, the white crests of the Annapurna range glowed in clear autumn light. A golden eagle hung still in the air off the shoulder of the hill, surveying the dark green valleys that sloped off massively in every direction. Below us the thin forest gave way to junglier foliage and then, below, to terraced farms and villages and then to raging rivers. Water, I thought. That would be nice. After a while Ali spoke: “We are the fattest people on the mountain,” he said.

“What about those German women at dinner?” I replied. He shook his head sadly. I waited for my heart to calm down. Death itself by then would have come as sweet relief, but I had heard that stricken trekkers were taken off the mountain by donkey and I wanted to spare my family the headline: “Mule Never Walk Alone: British hiker makes ass of himself.” 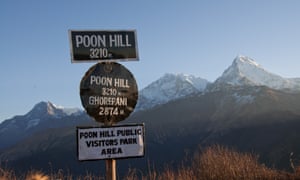 At times over the preceding couple of days it had certainly seemed possible to die of stairs. If you search online for the “easiest trek in Nepal”, Poon Hill is the name that keeps cropping up. To believe the descriptions, this would be the gentlest of strolls, the kind of thing you might do with a Labrador to shake off a long lunch in the countryside. That was what we had in mind. Three days in the shadow of Annapurna, in the centre of Nepal. Enough to say we’d done our Himalayan trek, but not long enough to worry about training. 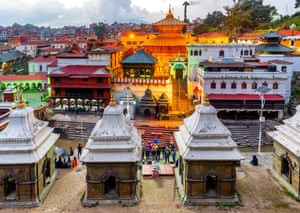 We warmed up with a few days’ acclimatisation in Kathmandu. Our guide there was our friend Guy, who is living in the city while he finishes a PhD in Sanskrit. We did what any old university friends do in these situations: buy a bottle of cheap whisky and start abusing each other. At night we went down to the Pashupatinath Temple, which sprawls on both sides of the Bagmati river, a holy site for Buddhists and Hindus alike. The dead are still cremated here, and light from burning pyres cast the buildings alongside the water in flickering orange light. Wild dogs and monkeys watched from the shadows. The animals are sacred and have the run of the place. Slowly, groups of pallbearers emerged from back streets, holding white-shrouded bodies aloft. 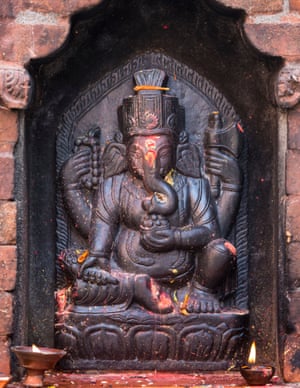 An outdoorsy friend had put me in touch with Rajan Simkhada, the genial boss of Earthbound Expeditions, one of approximately 153,000 tour companies in the city, and he had agreed to set the trip up. The next morning we met him for coffee in the grounds of Dwarika’s Hotel, perhaps the most famous residence in the city and certainly one of the most beautiful. Its red brick buildings are adorned with intricate wood carvings, some many hundreds of years old. Kathmandu’s architectural heritage can’t be taken for granted; much of it is still being rebuilt in the wake of the 2015 earthquake, which killed about 9,000 people. Rajan explained that it had also decimated tourist numbers, although they were rising again.

Rajan didn’t mention the stairs. He just looked us up and down and gave us a wry grin. “You’ll feel you have done some exercise,” he said. In total the Poon Hill circuit involves a climb of around 1,500 metres, or the Shard five times over, to put it in softie Londoner terms. Almost all the elevation is by steps, some 3,381 in total. The route is a loop around the southwestern edge of the larger Annapurna circuit, which in its entirety takes three weeks. The paths are well marked, with thousands of trekkers going around every year. Rajan even has a hotel, the Thamel Eco Lodge, where you can stay before or after the trek. All we had to decide was how to get to Pokhara, the lakeside city west of Nepal from which many treks start. The bus was seven hours, the plane half an hour.

When we landed at Pokhara the next day, Arjun was there to meet us along with his cousin, Kedar, who would be our porter. Arjun said this would be his 75th trip round Poon Hill and he was anxious to get cracking. In contrast to the pricey walking shoes I’d bought in Covent Garden, both of them wore trainers. Their footwear proved little impediment to them as they led the way up from Nayapul, the village where we spent the first night. Accommodation on the trail is in “tea houses” – lodges with varying degrees of facilities. Some have hot showers, most have wifi, all have beer – an accurate reflection of the modern pyramid of human needs. Day two was at Ghorepani, before our dawn ascent of Poon Hill itself and a final night in Ghandruk. 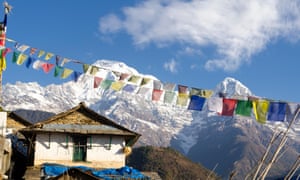 Like parents, good guides know to overestimate times and distances. Arjun’s skill was that he adjusted this even as we thought we had sussed him out. On the first day he would say an hour and mean 45 minutes. On day three he’d say an hour and we would think “Aha”, 45 minutes, but it would only be half an hour. It’s impossible to overstate the boost to morale of a surprisingly quick finish. In the evenings he would tell us about Nepal’s history while we ate yet another meal of dal bhat, the ubiquitous plate of curry, rice, dal and pickles which our guides happily wolfed down three times a day. Arjun was proud of his nation, famous mainly for hard men (Ghurkhas and Sherpas) and steep mountains – even though its potholed roads are not helping its drive to become a more modernised and diverse 21st century economy.

For all the agony of the climb, by the time we were on the way down the Himalayas had worked their magic. What got me wasn’t the eagles or the butterflies or the cheerful locals saying their endless namastes as you passed, or the terrain that went from exposed snow-capped peak to rainforest canyon to mountain meadow. It was the sheer size of the landscape. The mountain grows under you until it occupies your whole mind. As we neared the end we were overtaken, with a slight tut, by an old woman on crutches, one ankle set in a cast. She had seen it all before.

• A three-night tour of the Poon Hill with Earthbound Expeditions circuit starts from $300 (£238), not including plane transfers. A night at Thamel Eco Resort starts from £28. Qatar Airways flights from Heathrow to Kathmandu start from £429 return