Like free museums and art galleries? Cheapest destinations for cultural breaks revealed – and it’s Budapest that’s best value and London and New York the most expensive

The cheapest destination for a cultural break has been revealed – and it’s Budapest that’s the best value for money.

A study looked at the prices in 18 cities for visiting cultural attractions such as museums, art galleries, a heritage landmark, a dance performance, an opera and a classical concert.

New York was rated as the most expensive city for culture with London also faring badly – despite the fact most museums and art galleries are free to visit. 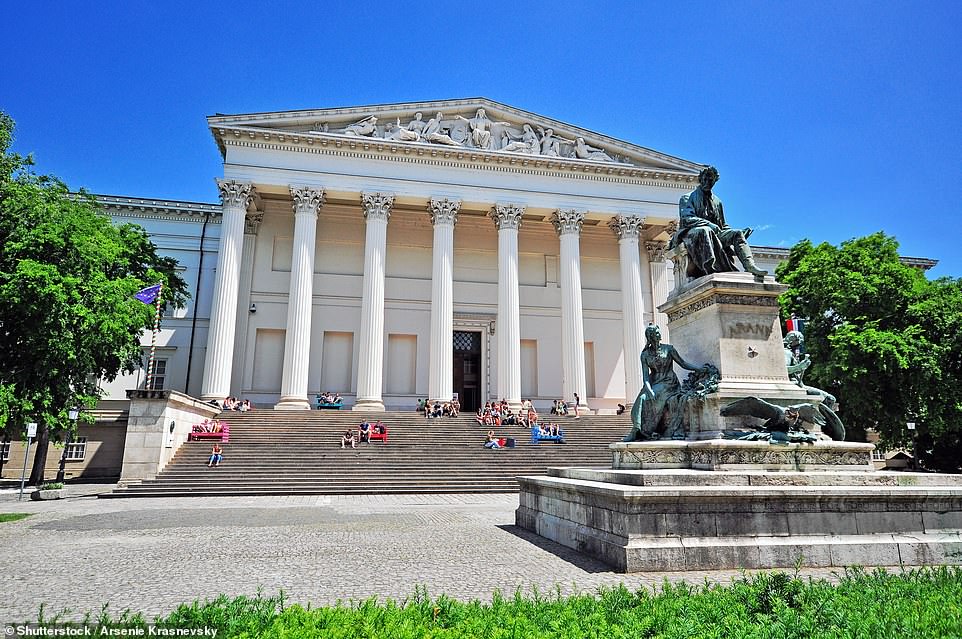 New research has revealed that Budapest is the best value for money when it comes to visiting cultural attractions on a city break. Pictured is the Hungarian National Museum

The research was carried out by Post Office Travel Money as part of its annual ‘cost of culture report’.

This is over 46 per cent less than a year ago, mainly due to a big fall in the cost of a classical concert ticket from £70 a year ago to £13.30 this autumn.

The second cheapest cultural city is Polish capital Warsaw (down 1.7 per cent to £92.36) and Prague (up six per cent to £99.20) is third cheapest, making it a clean sweep for Eastern Europe at the top of the table. 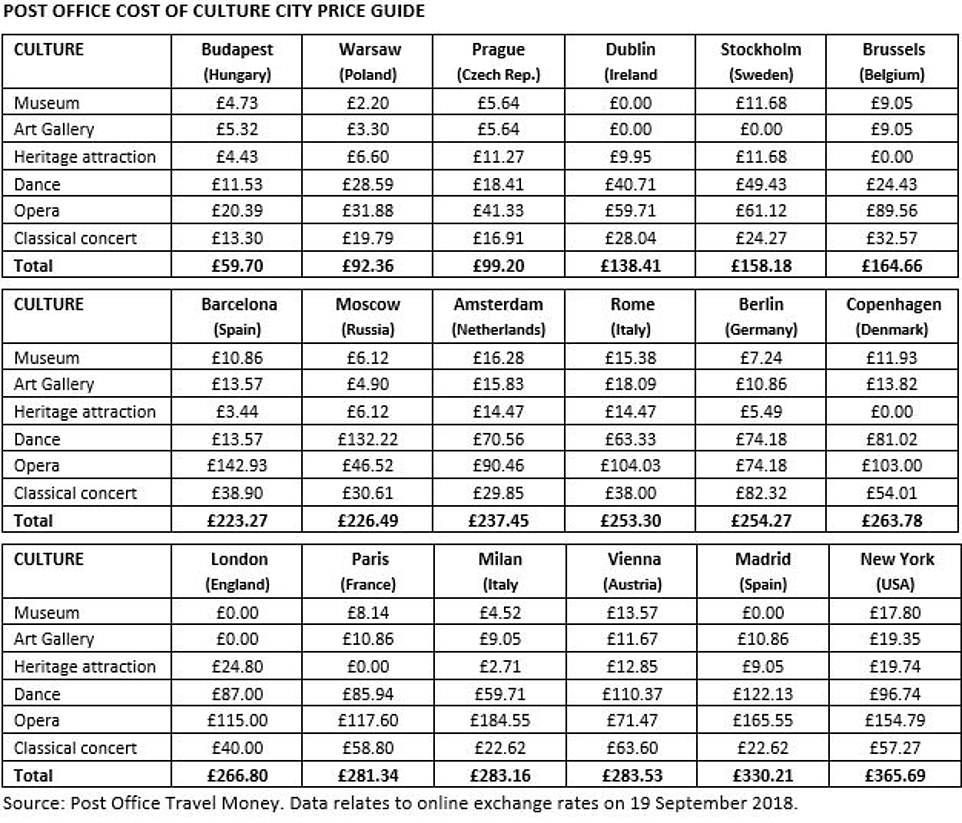 A table produced by Post Office Travel Money, which shows the breakdown of costs for visiting different cultural attractions

The overall prices in all three Eastern capitals were less than a third those in Madrid, the most expensive European city surveyed at £330.21.

Dublin, emerges as cheapest in the Eurozone as it costs £138.4 to visit its six cultural highlights. 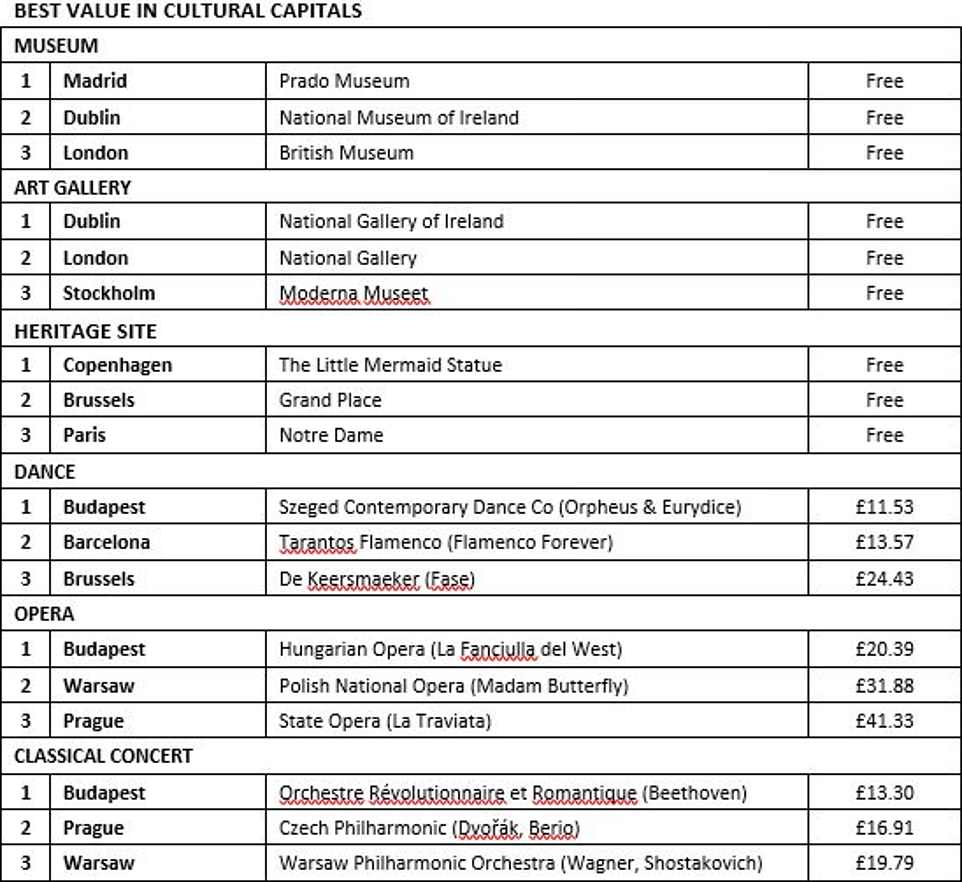 Some of the cheapest places to go for culture. The table shows that several of the most famous museums in Europe are free

New York was again the most expensive city surveyed. At £365.69, its six cultural attractions cost a third more than in London.

However, an opera ticket to see Carmen at the Metropolitan Opera (£154.79) costs less than a visit to La Scala in Milan (La Finta Giadiniera, £184.55) and ballet is cheaper in New York than in Moscow, Madrid or Vienna.

In sharp contrast to the lower ticket prices found in many top cultural capitals, there were big increases in others, notably Moscow.

The high cost of a Bolshoi Ballet ticket at the Bolshoi’s Historic Stage accounts for this increase – £132.22 this October compared with half that amount (£65) last year. 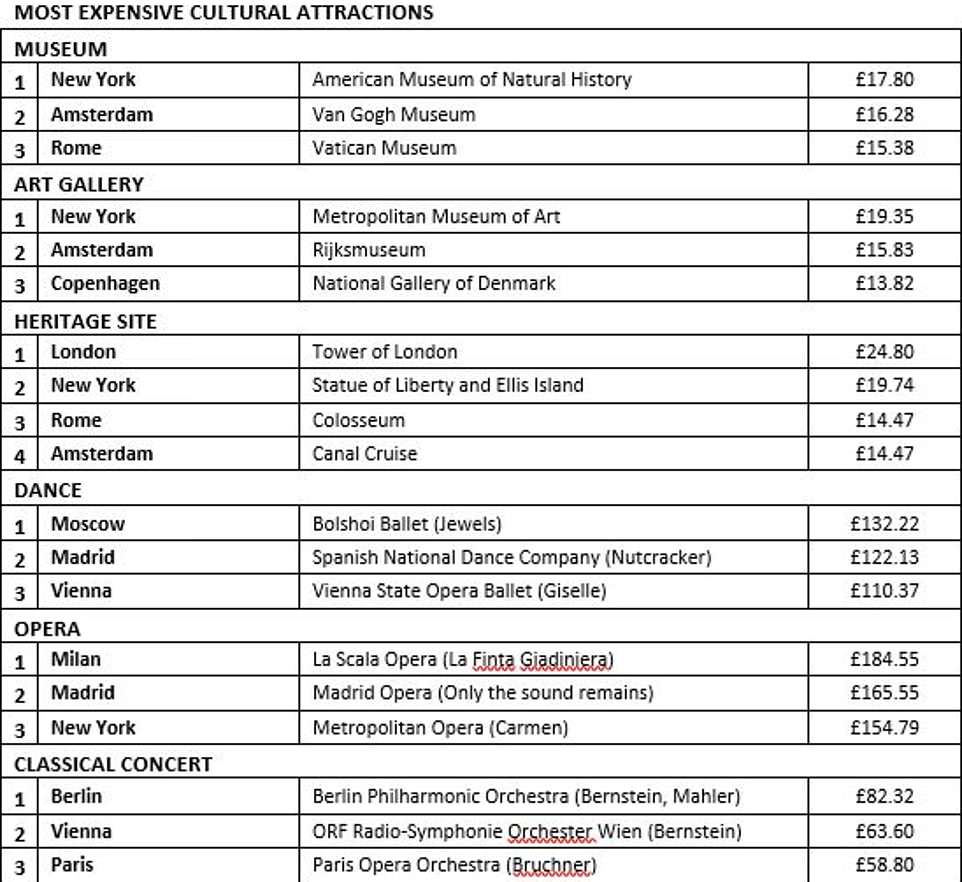 A table showing some of the most expensive cultural experiences. The most costly is watching an opera at La Scala Opera House in Milan 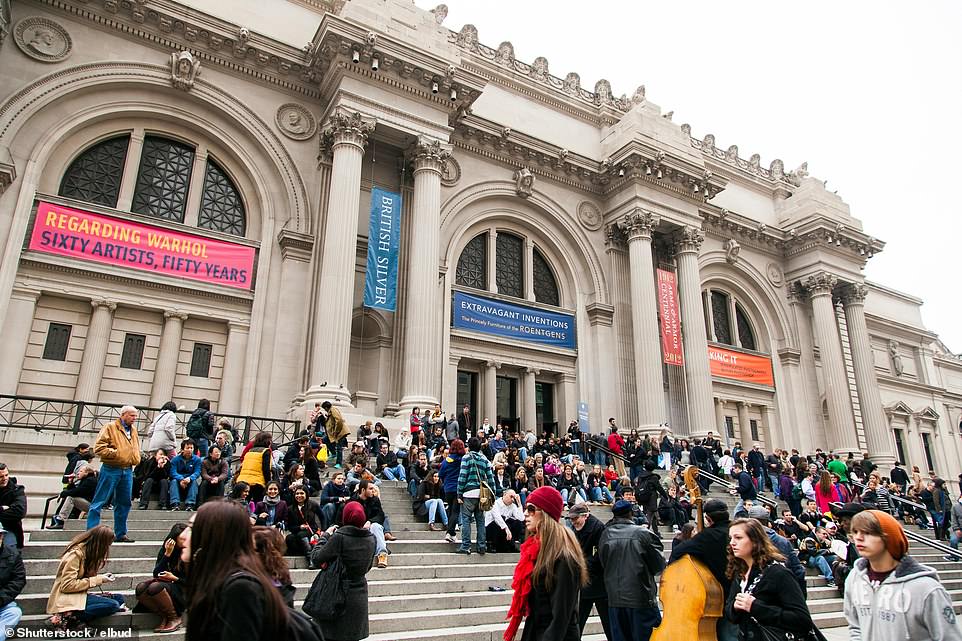 ‘It is worth doing your homework and checking what performances are scheduled for the dates of your visit before booking a city break as the cost can vary dramatically depending on the venue, orchestra and ballet or opera company. That is exactly what we found in Moscow and several other cities this year.

‘The cost will also vary depending on individual tastes in culture. Opera lovers are likely to pay more than people who want to see an orchestral work and that cost can be very significant in cities boasting the most famous opera houses.

‘By contrast, art lovers will find that many of Europe’s leading heritage sites are free to visit. So are some of the world’s top museums and galleries like London’s British Museum and National Gallery.

‘Culture vultures can also save a lot of money if they know the ropes. Afternoon ballet and opera performances often cost less than evening ones and galleries across Europe are free on specific days of the month or cheaper if visited late in the day.’