Lemaire Channel, ANTARCTICA — I’ve probably seen 100 ships christened by everyone from Lauren Bacall to Pitbull, but the renaming ceremony of the Silver Endeavour is the first one I’ve witnessed from the deck of a Zodiac boat, bundled in a ski cap, parka, snow pants and knee-high boots.

It was undoubtedly a modern event, with godmother Felicity Aston releasing a magnum-sized bottle sculpted of solid ice into the side of the ship, in keeping with the requirements for items sent overboard in the pristine environment of the White Continent.

The Silver Endeavour, the former Crystal Endeavor, dwarfed our rubber rafts as a film team choreographed a dance between the 20,000-gross-ton ship and 13 Zodiac dinghies while recording the moment for posterity.

Silversea Cruises was fortunate enough to be able to stage the event in the Lemaire Channel, which is often blocked by ice early in the Antarctic cruise season. The narrow channel with steep soaring peaks on both sides is one of the most picturesque backdrops in Antarctica, and we had a partly sunny day that created dramatic shadows and lit up the deep aqua coloration of the glacial ice that underlies the drifts of snow.

With its sharply detailed but austere landscape of white, gray and blue and its absence of people or man-made infrastructure, Antarctica often feels like being surrounded by an Ansel Adams photograph come to life.

The ship, painted in its new livery of warm gray and cream, fit right into the Antarctic color scheme. Only the passengers in their fire-engine red parkas seemed painted from the palette of another, less ethereal artist. 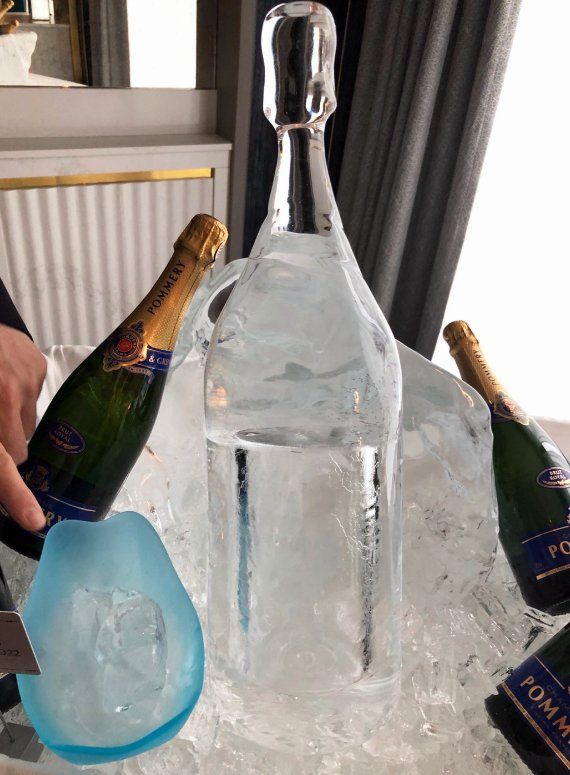 Aston knows the Antarctic scenery like the palm of her hand. She was the first woman to ski solo across the continent, accomplishing the feat in 59 days in 2012. More than most chosen to inaugurate a ship, she was a strong match for the particular vessel and occasion.

Silversea executives are thrilled to have acquired a nearly new, purpose-built polar expedition ship at a desirable $275 million price. They won out over several bidders in the bankruptcy auction of the ship on behalf of Crystal Cruises’ creditors.

Chief commercial officer Barbara Muckermann credited Silversea parent company Royal Caribbean Group and its deep pockets for the win, saying it enabled the line to offer financial guarantees that other bidders could not.
Along with the ship, Silversea was also able to attract many former Crystal crew members, including Crystal Endeavor Capt. Niklas Peterstam.

Maneuvering in our Zodiac through countless small chunks of ice as we waited for the christening to begin, I was happy to know that the captain of our ship already had experience with our vessel in polar waters.

After the bottle ceremony, Zodiac expedition leaders broke out champagne for the guests to toast the newest addition to the Silversea fleet. The bubbly stayed properly cold in the 35-degree conditions as we motored back to reboard the ship.

Zodiacs and bubbly might be representative of the new formula for expedition cruising that combines the adventure of discovery with the luxury of high-end cruising. Sailing to Antarctica on Silver Endeavour won’t be an inexpensive cruise, but for passengers who want that paradoxical mix of challenge and indulgence, it may be just the ticket.