Animals have various methods for getting our attention – some whimper, some squeal and some squawk.

But it appears that a goat in a petting zoo has worked out another way to be fussed over by humans – by pretending to get its head stuck in a fence.

The goat’s ploy was made public by a visitor who posted details of the deception to a website. 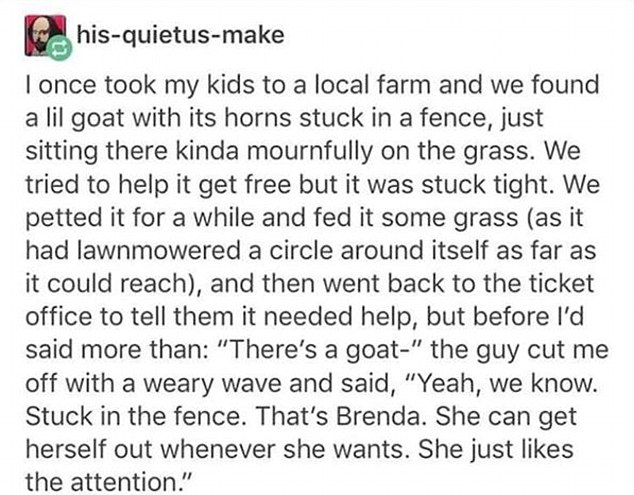 Going by the user name ‘his-quietus-make’, they described how they discovered the creature entangled in a fence, with its horns poking through.

But when they went to free the goat, they were unable to prise it free, so petted the animal and brought it grass so it wouldn’t go hungry.

Fearing the goat was in danger, the visitor went back to the farm’s ticket office to tell a member of staff to bring help to free the creature.

But the visitor explained: ‘Before I’d said more than “there’s a goat…” the guy cut me off with a weary wave and said: “Yeah we know. Stuck in the fence.”

‘”That’s Brenda. She can get out when she likes. She just likes the attention.”‘

When the story of the wily goat was posted to Imgur, others reacted with disbelief that the animal would be so cunning and said the creature was hilarious.

And ‘sarabeth72’ added: ‘I would have fallen for Brenda’s lies and sat crying as she lawnmower-ed the grass around her.’ 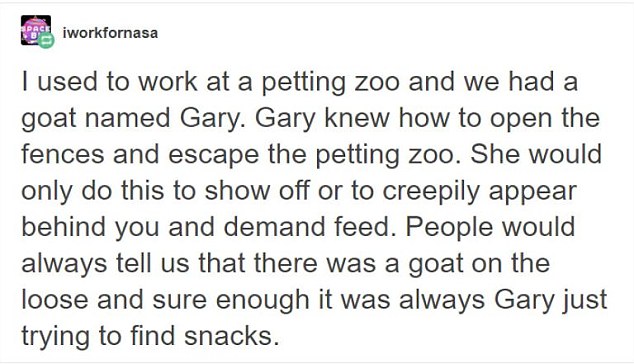 It turns out that Brenda isn’t the only goat that knows how to get the attention of humans.

Another poster called ‘iworkfornasa’ revealed the story of a goat called Gary who employed a similar tactic.

He wrote: ‘Gary knew how to open the fences and escape the petting zoo.

‘She would only do this to show off or creepily appear behind you and demand feed. 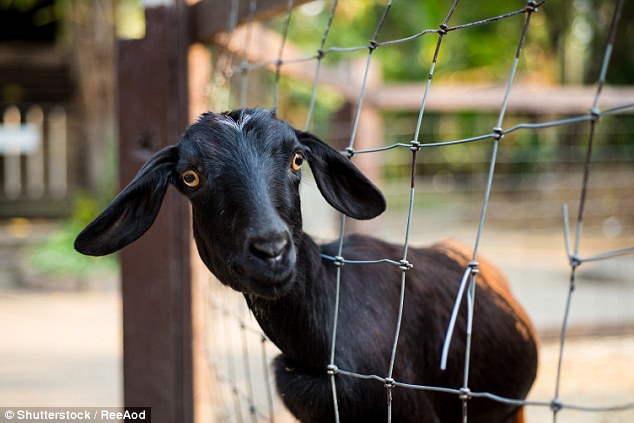 ‘People would always tells us that there was a goat on the loose and sure enough it was always just Gary trying to find snacks.’

While ‘housecat’ added: ‘It’s not a unique occurrence. My parents have a male goat called Heph who does the same thing.’

And ‘nemophillixt’ added: ‘I have a goat, and honestly that is a very goat-like thing to do.’