The City of Lights: it’s the place to stroll down boulevards, gaze at world-famous art and eat like a king – but where should you bed down when it’s time for lights out? As the capital city of the world’s most-visited country, the choice of where to stay in Paris is mindboggling, with thousands of accommodation options, from budget hostels to luxury hotels, and B&Bs to self-catering apartments.

As a France specialist, I’ve stayed in hundreds of hotels across l’Hexagone, but nothing quite compares to the je ne sais quoi of the kind of Parisian abodes which can, in themselves, become a highlight of any stay in the French capital.

But style doesn’t have to mean breaking the bank; there are plenty of superb hotels offering great service, exquisite decor and a peaceful night’s sleep without getting into debt. It’s what we at The Independent call “real-world luxury”. So take a peek at these before your next trip to Paris. 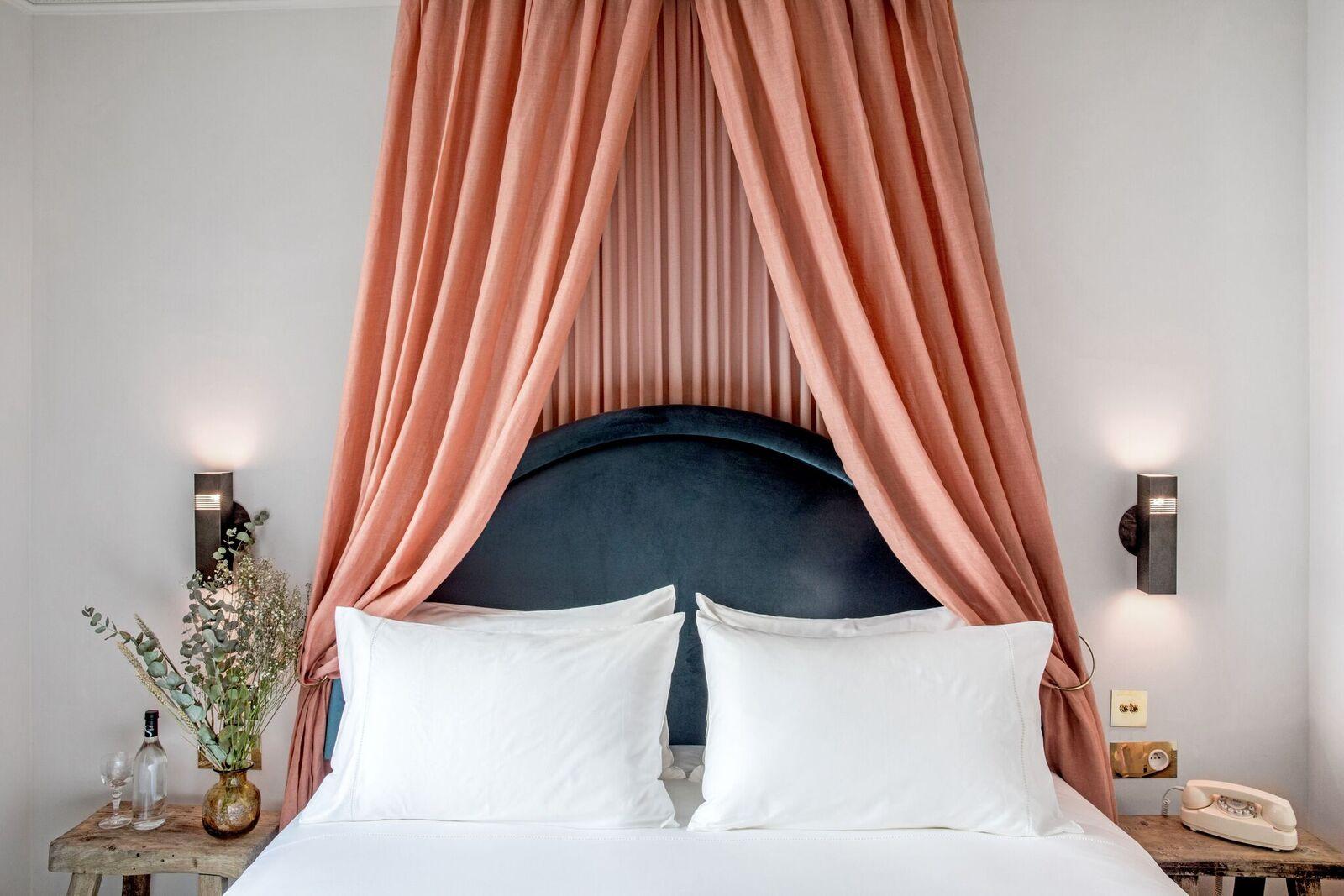 From London’s Experimental Cocktail Group comes Hotel des Grands Boulevards, a chic new property located in a 300-year-old manor house close to some of Paris’ best shopping streets, which opened in December 2017. Wonderfully discreet, it’s reached via a secret corridor and has its own quiet courtyard and terraces.

The 50 rooms have been created by Parisian designer Dorothée Meilichzon, and have handmade beds from Brittany with satiny, 300-threadcount sheets, while some rooms offer bathtubs big enough for two. There’s also an Italian restaurant and a terrace cocktail bar with views of Paris. The best bit? Despite its buzzing central location, the bedrooms promise complete silence.

Doubles from €200, room only
grandsboulevardshotel.com​

Best for cocktails: The Hoxton Paris 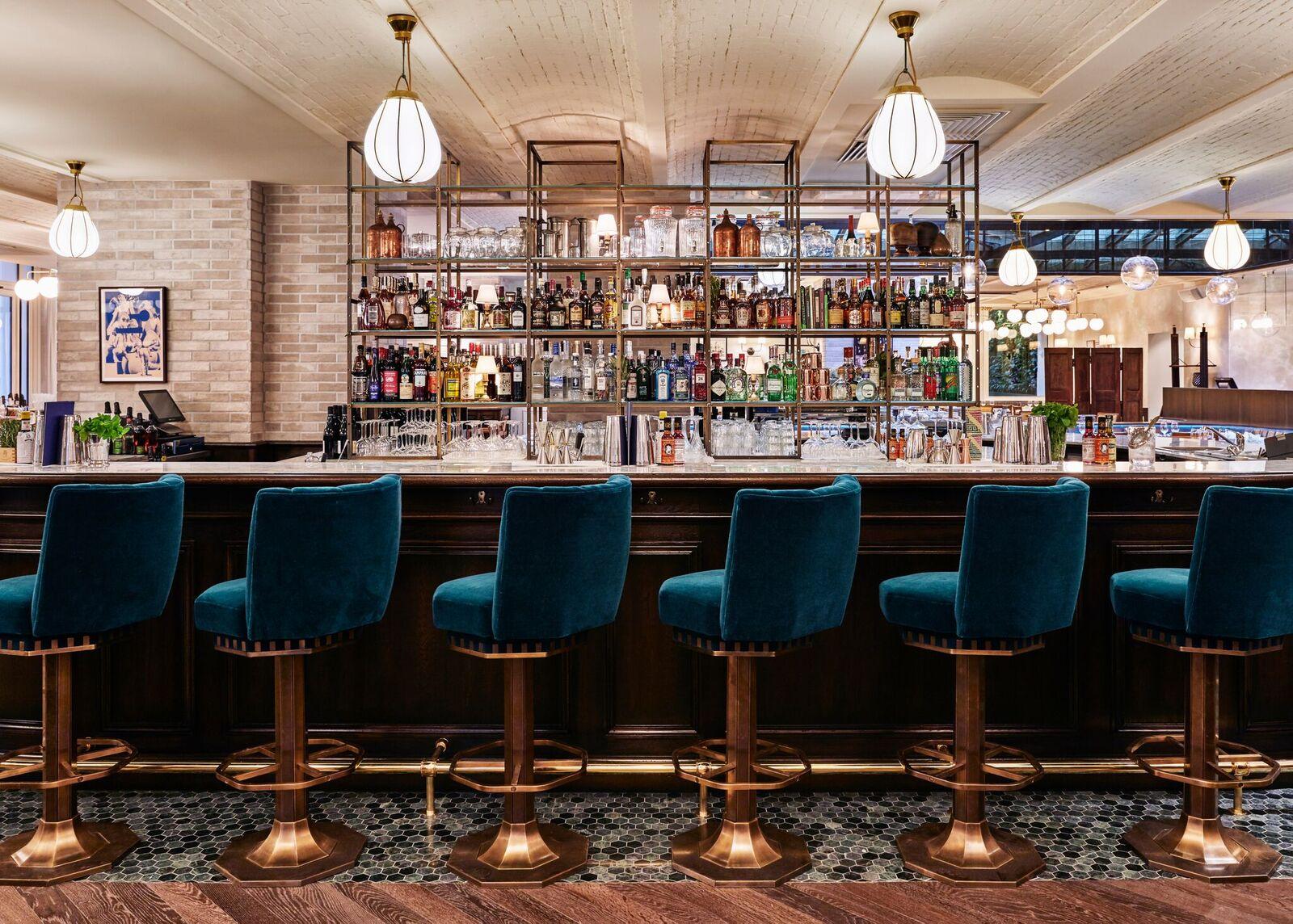 The newest addition to Paris’ design hotel scene is a British export. The Hoxton Paris, which opened in summer 2017, brings with it superb Moroccan-inspired cocktails in Jacques’ Bar. Decorated in florals and velvets, with full-height windows, it makes all-day cocktails a perfectly acceptable prospect.

The hotel itself is located in an 18th-century mansion, and is the biggest of the Hoxton hotel collection (currently in London and Amsterdam, with Brooklyn coming next). Spread over three buildings, it offers 172 bedrooms in four very British-named categories – Shoebox, Cosy, Roomy and Biggy – with decor featuring parquet floors, elegant cornicing, bold feature walls and geometric-tiled bathrooms. The standout design feature is its 15 elegant staircases, two of which are more than 300 years old. Elsewhere, the decor incorporates other features of the original building, such as tiles and mosaics, and exposed timber roof beams.

Doubles from €99, B&B (there’s a free light breakfast bag delivered to your room; for anything else, you have to pay)
thehoxton.com​ 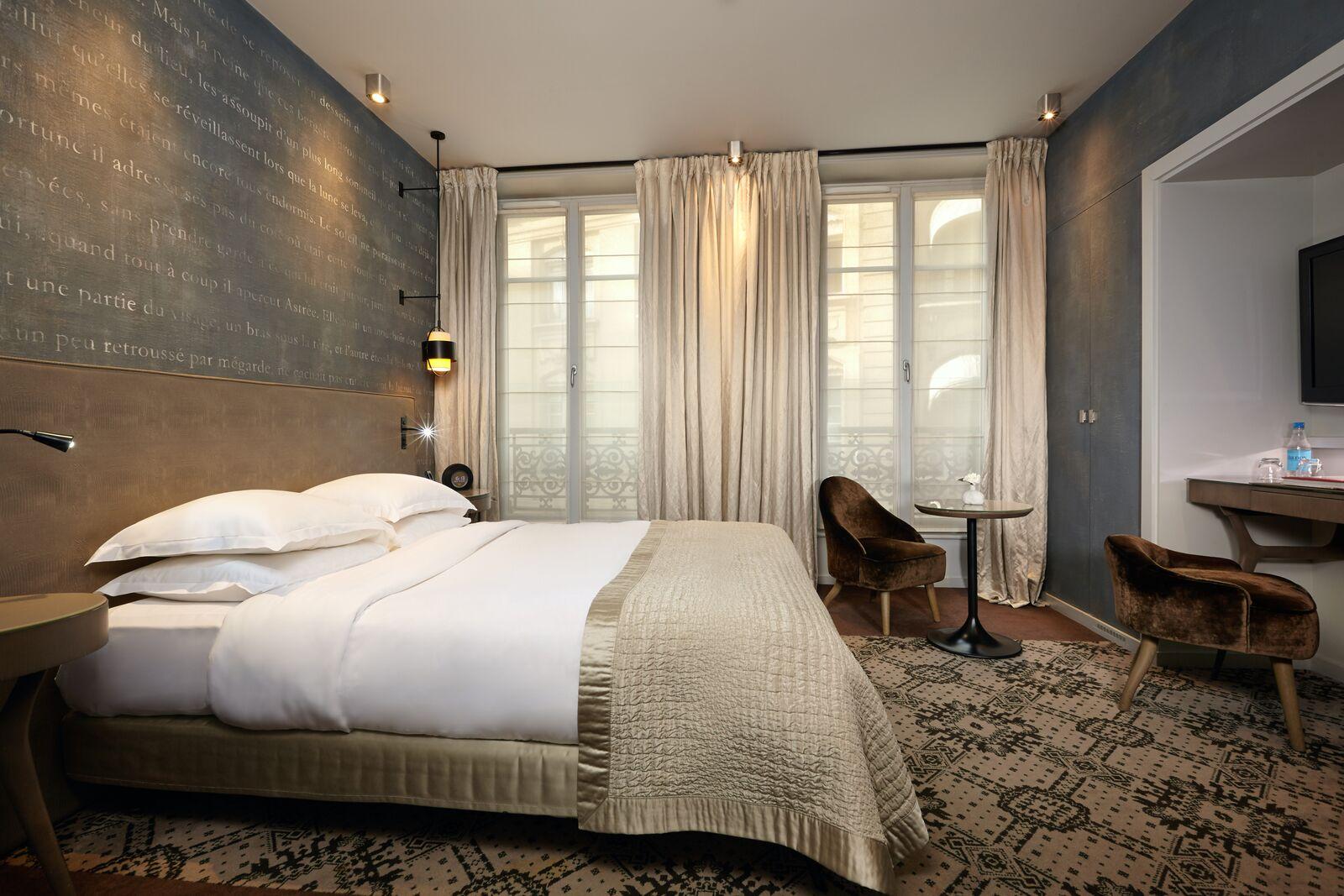 This soothing hotel is a must-stay for book lovers: its elegant decor is dedicated to great works of literature. Each of its 26 rooms and suites is dedicated to a different letter in the alphabet and in turn a great scribe, from Hans Christian Andersen to Emile Zola.

Some rooms offer views of the Eiffel Tower, but all feature calming neutral tones and hand-stencilled texts from the writers’ great works. It’s located in the 8th arrondissement, so is a short stroll from the Champs Elysées. 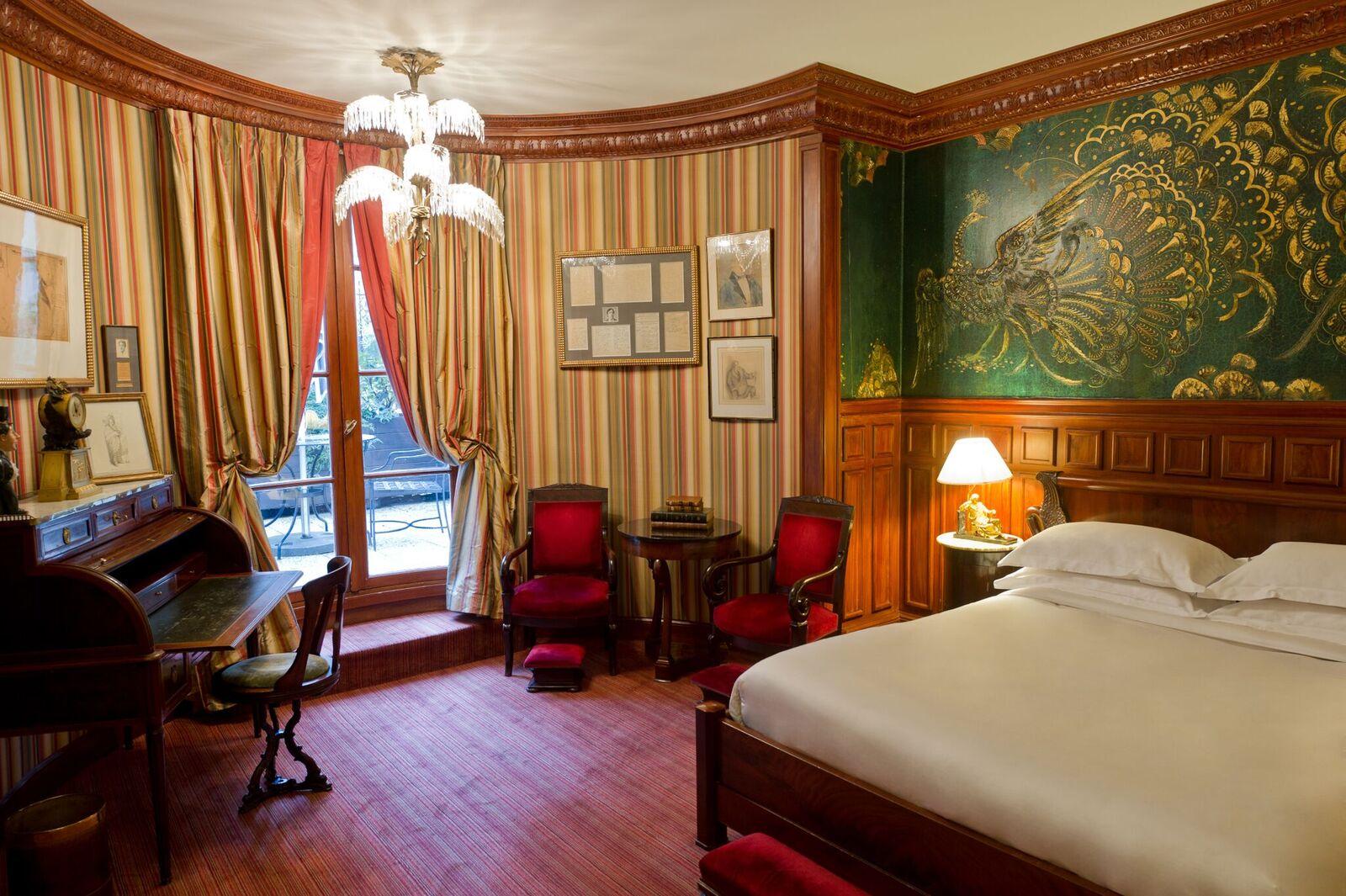 Literature lovers will delight in this bijou hotel, tucked away on the Left Bank. Once upon a time, it was a flea-bitten doss house where Oscar Wilde breathed his last, shortly after uttering the words “This wallpaper and I are fighting a duel to the death.”

Now, though, on the walls of that very same room (number 16), interiors guru Jacques Garcia has created a magnificent fresco of a gold and green peacock, while the rest of the room features historic prints and photos of Wilde, as well as the famous scribe’s desk. Elsewhere, the tiny bar makes for a wonderfully cosy spot to be served a cocktail by the velvet-waistcoated bar staff. Dita Von Teese is a fan, and so – apparently – is Johnny Depp. 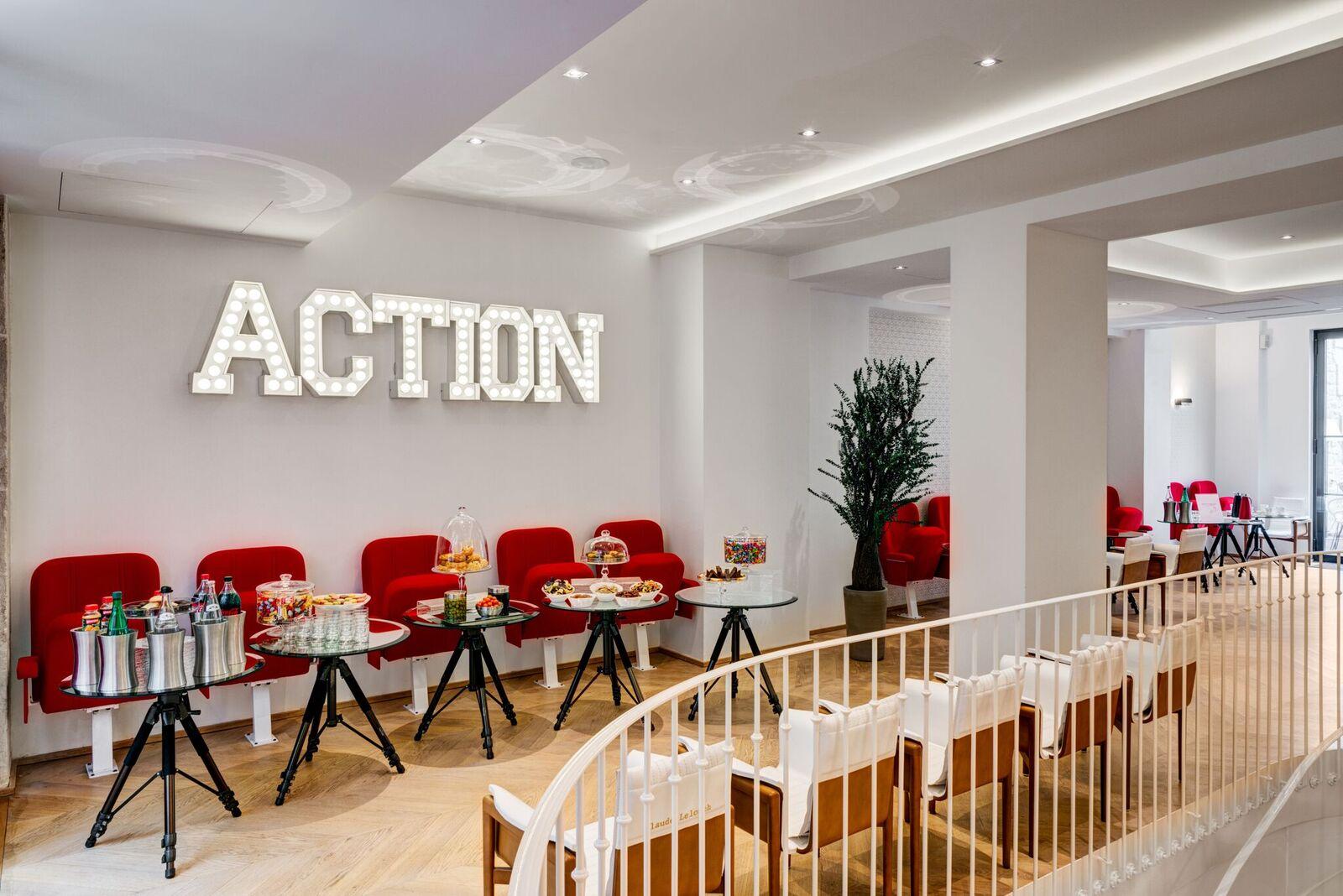 The French love a theme and this fantastic movie-obsessed hotel is just a few metres from the famous cinema Le Grand Rex. Every detail is cleverly thought out, from its reception desk beneath an illuminated billboard to the cinema posters in the lobby.

The 63 bedrooms vary in style and have been designed by such cinematic glitterati as film-score composer Ennio Morricone and César-award-winning actress Elsa Zylberstein. The minibars are stocked with complimentary soft drinks. 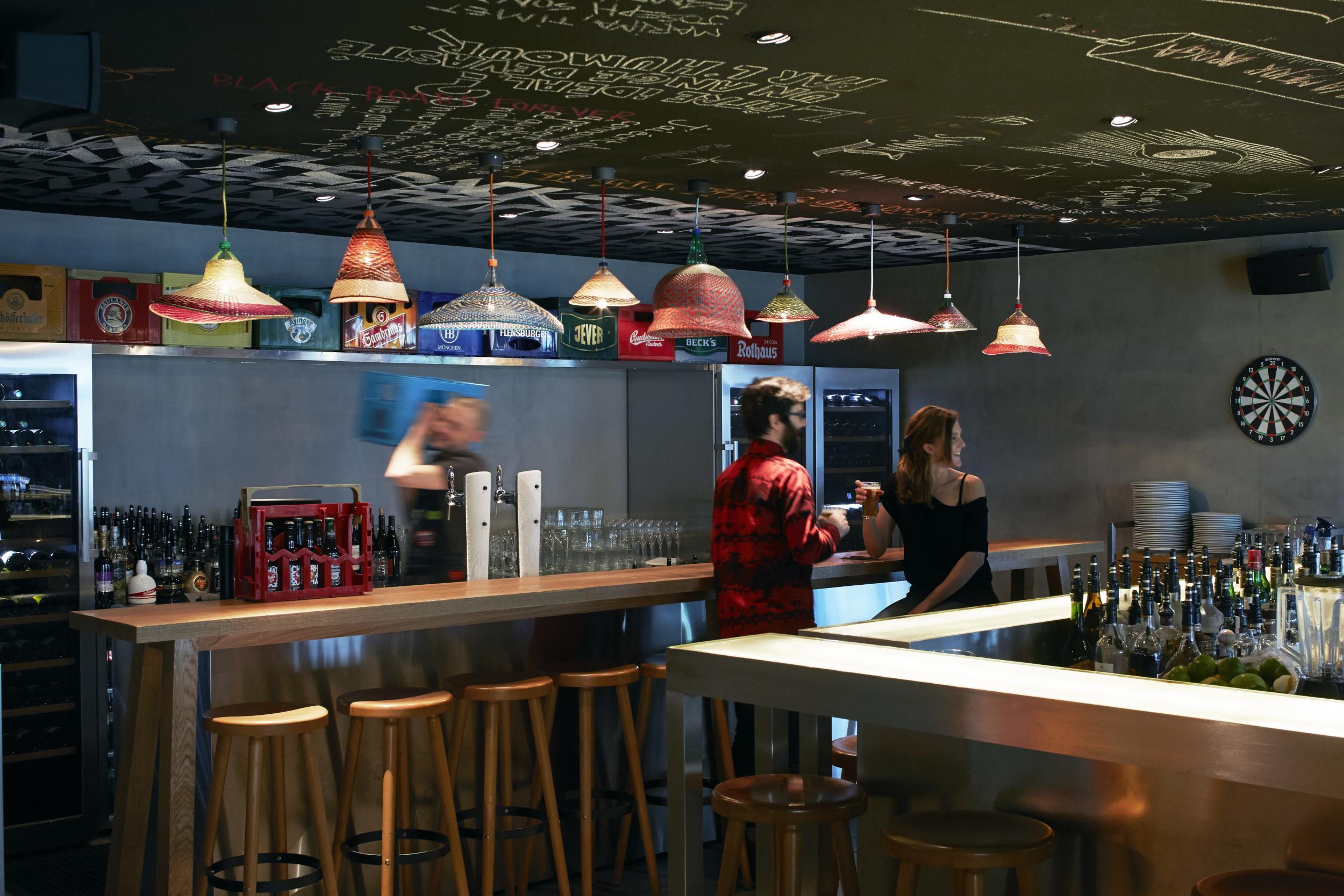 The Mama Shelter brand launched in 2009 with this, their original hotel; since then the budget-style group has gone global, with branches in Hollywood and Rio de Janeiro as well as in key French cities. Prague and Belgrade are up next.

That’s not to say it lacks that French vibe; as the original, this was designed by Philippe Starck, who gave his quirky Midas touch to the whole place. Meanwhile, many of the dishes on the menu in the laidback restaurant were created by another French legend, Michelin-star chef Guy Savoy.

The 172 bedrooms aren’t enormous, especially the entry level ones, and they’re deliberately designed to be cocoon-like with black and grey decor. But with mod cons such as a 27-inch iMac doubling as a TV, it’s the perfect place to crash when the City of Lights has worn you out.

Doubles from €79, room only
mamashelter.com

Best for luxury: The Saint James 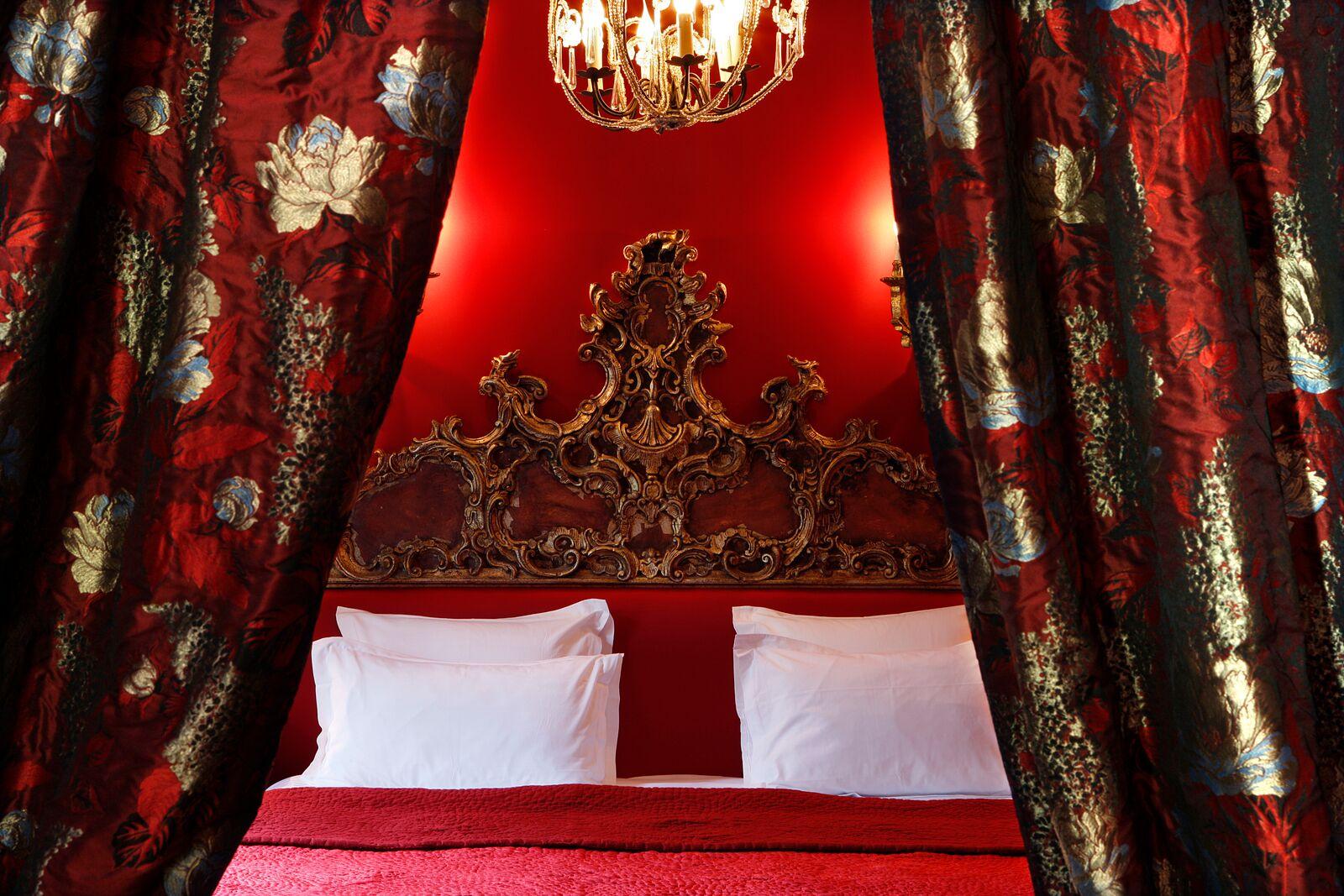 If you’re going to push the boat out with something a little different, then this slightly bonkers 49-room hotel, part of the Relaix & Châteaux group, is the place. Set in the elegant 16th arrondissement on a former airfield that was used to launch hot air balloons, this theme is carried through into the hotel’s Wonderland-esque decor with rooms sporting bold toile wallpapers and lavish fabrics.

Doubles from €380, room only
saint-james-paris.com​ 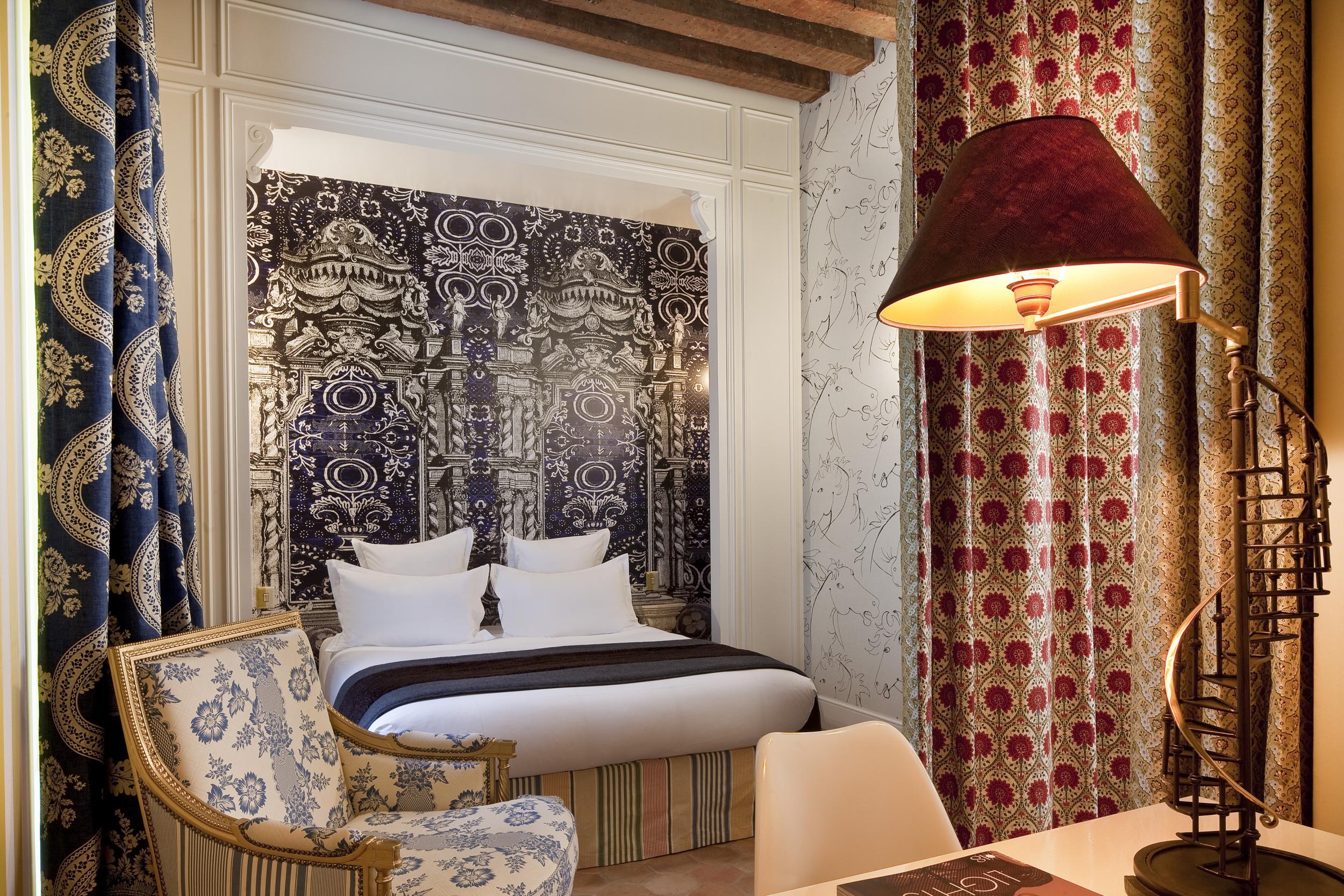 Fans of Christian Lacroix will love this four-star boutique hotel in the Marais; the fashion designer has brought his flamboyant style to the 17 rooms. All are decorated in a unique style, including polka-dot carpets and zebra-print fabrics, giving a nod to the history, culture and art of the area. On the doorstep there are a host of hip boutiques, as well as restaurants and bars (though the hotel’s own bar is the ideal place to kick off your evening with an aperitif). Lacroix isn’t the only celebrity to be linked to the property – the building was Paris’ first bakery, and Victor Hugo used to buy his baguettes here. 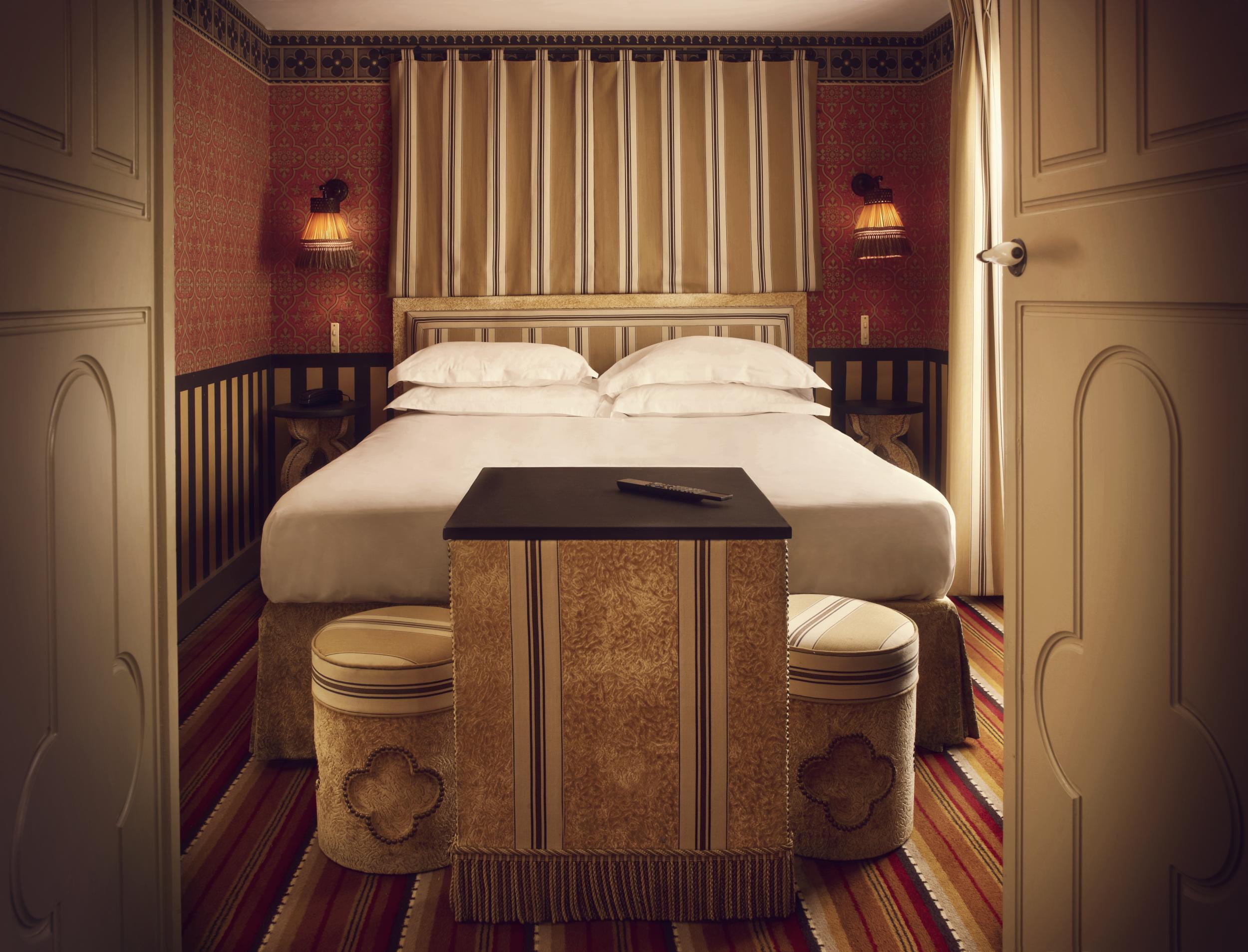 This bijou four-star hotel in the hip Marais District is another of Jacques Garcia’s works. This time, he’s made what is a tiny space into something of an Aladdin’s cave of decor. The place abounds with whimsical opulence: chandeliers, antique furniture, lavish fabrics and wallpapers all in deep reds, with accents of purple, green and grey.

Rooms are cosy, but it’s a delight to snuggle into the comfortable beds and watch a classic French film (available from reception), complete with popcorn. Staff are welcoming without being overbearing, and the hotel is a hop, skip and jump from some of the Marais’ best restaurants and bars.

Doubles from €290, room only
bourgtibourg.com​ 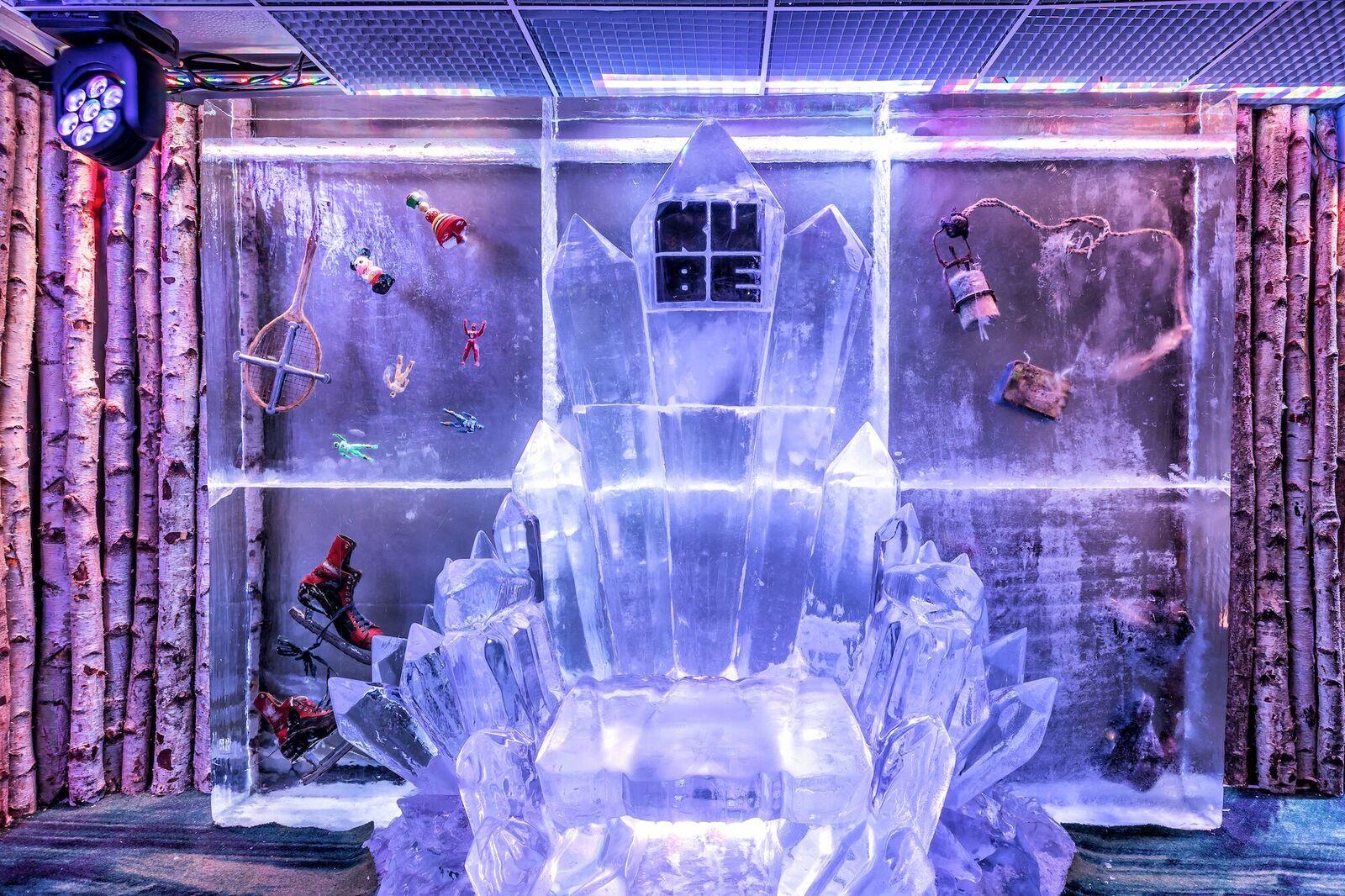 Not many hotels can lay claim to their own ice bar but this is the main attraction at Kube, where you can sip vodka cocktails in glasses made of ice, in -10°C temperatures. The theme doesn’t end there; on arrival at the hotel you’re welcomed into the reception, set in a large glass cube in the courtyard.

From there, everything’s designed to be modernist and fun. Its 40 open-plan, minimalist rooms offer all mod cons, including plasma TVs, CD and DVD players. The hotel is a short walk from Gare du Nord, so it’s a great location if travelling with Eurostar.

Doubles from €139, room only
kubehotel-paris.com​

Set in the hip Pigalle district under the gaze of the Sacré-Coeur basilica, Grand Pigalle was the first Paris hotel from the Experimental Cocktail Group (who have also just opened sister Hotel des Grands Boulevards, above) and makes the perfect base for those in search of Paris’ coolest bars and restaurants. Rooms are cosy but offer swish decor from top designer Dorothée Meilichzon in muted greys and teal tones, with geometric patterns in tiles and wallpapers. I particularly love the cocktail-glass carpet on the hallways and stairs and pineapple door knockers. Breakfast is served in the bar area and offers their delicious homemade granola.

Doubles from €170, room only
grandpigalle.com​

We may earn some commission if you click on a link in this article and buy a product or service, but we never allow this to influence our coverage.