An activity-filled heritage museum on the site of the world’s first purpose-built motor-racing circuit – which went on to become the largest aircraft manufacturing centre in Europe. Despite the site’s pioneering role in aviation history – during the second world war and, later, when Concorde was part built here – the museum seems to fly under the radar of most tourists. That was borne out on our trip during Easter school holidays: I was surprised how few visitors there were, though it was a pleasant contrast to many London attractions. We saw classic and Formula One cars and hangars devoted to military planes and aircraft design; there’s also a fantastic collection of bicycles and the London Bus Museum.

Best thing about it?

During the school holidays visitors have a chance to be driven in a vintage car up the steep Test Hill and along the 30ft bank of the old race circuit (tickets £1pp). We enjoyed it so much we went twice: in a cream Spartan kit car, then in a shiny red hot rod. Other upcoming events include an Italian car day (4 May), a vintage festival (18 May) and Mopar Muscle cars (including Dodges and Chryslers) on 26 May. 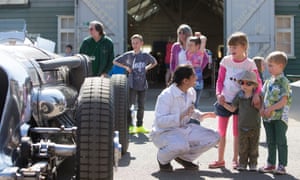 On 25 October 1932, driver RGJ Nash set a new record of 7.45 seconds for a climb up Test Hill (the top third has a gradient of 1 in 4) in a single-seater car, nicknamed the Terror. It crested the rise at about 50mph and flew about 40 feet before landing.

Exit through the gift shop?

The ticket desk is in the shop so there’s no avoiding it. A range of car-themed gifts includes toy cars, kit cars, mugs, clothing, cards keyrings and more. 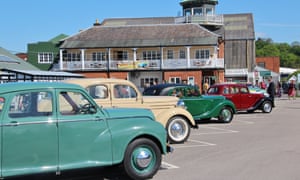 The nearest railway station is Weybridge, on the Woking-to-Waterloo and Staines-to-Weybridge lines. From there it’s a 20-minute walk, or take a bus from outside the station to the Brooklands Hotel. By car, it’s easy to reach via the M25 and A3 (take the Painshill junction towards Byfleet). 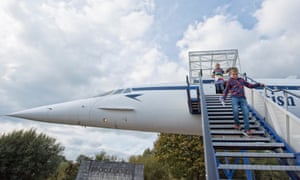 9/10.
You don’t have to be a petrol head or aviation fan to appreciate it. The collections are steeped in 20th-century history and full of facts (like the story of the short-lived steam bus in the early-19th century). It celebrates engineering and technology as much as motoring or flying records. There is also a strong sense of the community who raced and worked here from early race stars, such as Malcolm Campbell, to aircraft engineers, some of whom are now volunteers. My son has zero patience for information boards and declared his video games more interesting than the Concorde simulation cockpit, but he loved the Red Arrows experience in the 4D theatre (kids free 19-22 April) and the vintage car ride.